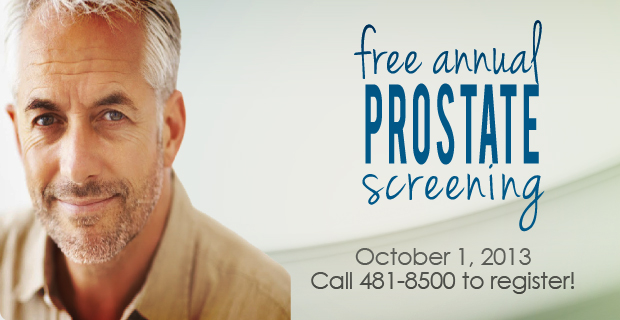 In order to promote Prostate Cancer awareness to the surrounding community, Medical West, an affiliate of the UAB Health System, will be offering FREE prostate screenings on Tuesday, October 1, 2013. Urologists, Dr. Rupa Kitchens and Dr. Mell Duggan will be conducting the screening. This two-part screening involves a physical exam and a PSA blood draw. The screenings will be held in the Medical West Professional Building, Suite 408 from 9 a.m. until 12 p.m. To register, please call 481-8500 by Friday, September 27th. Space is limited, so call today!

In order to increase awareness and urge Americans to join the battle against this disease, September has been declared National Prostate Cancer Awareness Month. During this month, men are encouraged to be screened since early detection is critical when it comes to prostate cancer. The number of deaths caused by prostate cancer has decreased dramatically over the past 20 years, in large part due to early diagnosis through PSA screenings and physical exams.

Prostate cancer is the second most common cancer in American men, just after skin cancer. The American Cancer Society estimates that over 238, 000 new cases of prostate cancer will be diagnosed in the United States this year. And over 29,000 men will die from prostate cancer during 2013.